Hey folk time for another review post, but this one comes with a twist. Stay tuned until the end of my review for an interview with the author Edward Aubry. 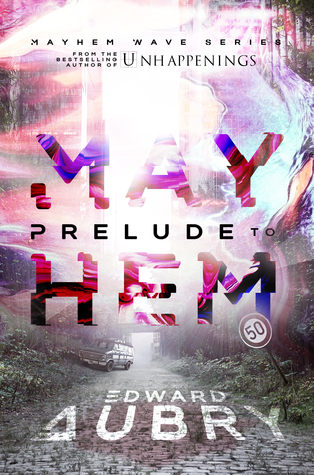 On May 30, 2004, the world transformed. Nearly all signs of civilization vanished, leaving in their wake a bizarre landscape of wilderness, advanced technology and magic, and leaving Harrison Cody very much alone. After weeks of surviving in solitude, he hears a voice on the radio, beckoning him to cross a thousand miles of terrifyingly random terrain to meet her, and any other survivors, in Chicago. Eager to find any remnants of humanity, he sets forth, joined by an unexpected—and inhuman—companion.
For Dorothy O’Neill, the end of the world means she will never finish ninth grade. On her own, she builds a home in the ruins of a strip mall, relying on her ingenuity and hard work to maintain some semblance of creature comforts. When another survivor arrives, he brings futuristic technology and stories of monsters he has encountered. Armed with this information, she takes a new interest in exploring her world, but she is not prepared for what awaits her, and the new arrival has brought his own set of problems.
On their separate journeys, Harrison and Dorothy begin to piece together what has happened to their world. Their questions have answers to be found in what remains of Chicago, and from the mysterious voice on the radio offering the hope that civilization can be rebuilt.

I found this a very enjoyable read that I read in a couple of days. the story and the characters were written excellently. I really liked the premise behind the plot and found it easy to follow and was kept interested. The characters were great and easy to connect with and follow their stories. The story is told from Harrison and also Dorothy’s point of view and although it was told by two different people I found it easy to keep up. I loved the post apocalyptic feel throughout the story and the combination of technology and things that come from both past and present. This book was a great start to what I think is going to be an epic series which I can see being my new favourite. I can’t wait to read more and see how the characters and plot play out.

Harrison – I loved Harrison, he was a great character. I loved his ambition to get to where he needed to go, his comic moments and also his serious heart filled moments. I really gained a lot of respect for Harrison when he took the two kids in as his own.

Dorothy – Another character I loved. Dorothy is only 14 but she has been through a lot and handled herself very well. I did feel sorry for her and the other characters who had lost family. Dorothy was a very determined character, plus she watched Harry Potter. (bonus points)

Glimmer – ahhhh Glimmer the pixie, don’t confuse her with any other creature. Glimmer was amazing, I loved her character. She was feisty, sassy and wasn’t afraid to say it how it is. She was a great companion for Harrison and she helped him through a lot. Things I can’t mention because I don’t want to spoil it.

Mitchell – Mitchell is the baby of the group at only nine years old. He has gone through a lot but he meets Harrison who takes him under his wing and Mitchell becomes his son in Harrisons eyes.

Thank you to Curiosity Quills Press and Edward Aubry for providing me with a free copy in exchange for an honest review.

There you go, that is my review I hope you enjoyed it. Now on to the most exciting  part!! The interview with Edward Aubry, this was a great interview and I really enjoyed the answers and I hope you do as well.

Lots of things!  Prelude to Mayhem is part of a larger story that has been buzzing around in my head for half my lifetime. Part of it was an experiment to blend science fiction and fantasy tropes in an original way. Part of it was a post-apocalyptic daydream I had driving to work one morning.

Dorothy O’Neill. In the earliest drafts of this story she was barely a character at all, added as an afterthought to give Harrison one more kid to take responsibility for. She has a much greater role as an adult in Mayhem’s Children, and as I got further and further into that book she really took off for me. It made me want to tell her backstory, which eventually became her half of Prelude to Mayhem.

Glimmer.  That’s not a guess. Every reader of every version of this story has identified her as the breakout star. Ironically, she was not originally meant to be a major character, just a comic relief sidekick. But once I started writing her, she got completely away from me.

Oh, my.  I wouldn’t want to be any of my characters!  Have you seen what happens to them? I’d rather keep all my fingers, thank you very much. One of the paradoxes of writing novels is the need to take the people you love the most and dump terrible, terrible ordeals onto them.  I’d much rather have them all over for a dinner party.  That would be great fun. But then I’d have to send them all back to their various fates.

Lisa Snook, my 7th and 8th grade English teacher. I wasn’t exactly her favorite student (I wasn’t really anyone’s favorite student, to be honest), which actually makes her influence more meaningful to me. She was the teacher who introduced me to creative writing. More importantly, she taught me how to plan a story by writing out a list of specifics before I started spinning the actual tale. Sensory details, character points, basic show-don’t-tell work.  Pretty elementary stuff, but in 7th grade it blew my mind.  At the end of 8th grade, she told me I had been one of her worst writing students when I first started her class, but after two years I had become one of her best. That comment alone has stuck with me for decades.

First book? Wow. I’ve never really thought about that.  Richard Scarry’s Busy, Busy World probably. If you mean first novel, I think that would be A Wrinkle in Time by Madeline l’Engle. If you mean first novel that I read on my own initiative, I’m pretty sure it was Spock Must Die! By James Blish.  All of those, believe it or not, have affected my own sense of how to tell a story (or how not to tell a story). The particular influences are left as an exercise for the reader.

Writing is the ultimate form of escapism and self-indulgence. As entertaining as it is to pick up a book and transport oneself to another world, the thrill of creating and manipulating that world is many orders of magnitude greater.

Find new places to write. I do my best work in unfamiliar environments, preferably quiet ones with large windows.  Bonus points if they serve coffee, but that’s not a deal breaker.

Finish your first draft. I used to hand out stock advice about how an outline is the most important part of the writing process, but I’ve lightened up on that a bit recently.  If you can write an entire novel without planning it, more power to you.  However, if you have 100,000 words and no idea how close you are to an ending, you are probably destined to spin your wheels for the rest of eternity.  Find your ending, and write it.  And literally write THE END. Then pat yourself on the back, and brace yourself for the revisions, because that first draft is going to stink no matter how much of your soul you poured into it. But a completed draft is infinitely easier to revise than a dangling story.

4 thoughts on “Prelude to Mayhem Review and INTERVIEW!!”