Psychopaths and Enthusiasts follows four individuals whose paths intertwine following the kidnapping of a little girl from her home on Christmas Eve.

The satirical thriller begins when a man finds himself in a room with two dead bodies, a girl tied to a chair, and no memory. He must find a way to figure out how he got into this situation, and how to get himself out of it. With the interference from a questionable detective, a woman with a samurai sword and an axe-wielding psychiatric patient, this quest will be anything but straightforward. What will happen when these strange characters collide? The frayed and fractured hands of fate will eventually decide who sees it into the New Year.

Disclaimer: I was sent a copy of this book thanks to the author, this does not however affect my opinion.

So at the begining of the book the author had put a disclaimer that the book wasn’t for everyone and unfortunately I am one of those people. Personally this book just wasn’t for me which is a shame because I really thought I’d enjoy it.

There you go guys a quick review for you.

General Quinn Ragnarok is a lot of things. Fierce. Dedicated. Intelligent. Skilled. And one of the only women to become a General within the Sentinel of Hydra, sworn to serve the Dominion of Archer’s State as a warrior against those who would dare rise against them. Her beloved dragon, Apep, is bonded to her not only in battle, but in their existence. A bond not taken lightly, for dragons from beyond the Long Realm of the Channel are among the most intelligent, extremely powerful, and do not bond easily with humans.

Betrayal is just around the corner, with the conspirator being one of her own, and war is imminent as proof of betrayal must be presented to the Council. She must rise to the Council’s wishes to fight against the Royals of Paderborn alongside her lifelong friend, Private Victor Shroud. Not only a soldier, but her trusted ally.

Will Quinn have the ability to lead her garrison to war, ensuring victory? Or will she fall to their sword?

Animus is a new high fantasy novella from award winning author, Kindra Sowder. Delve into this new tale and immerse yourself into a realm where war is coming, Halflings are controlling the forests with swords and arrows, and the skies are filled with dragons.

Kindra Sowder was born and raised in Rancho Palos Verdes, CA until the age of 12, when her family moved to Spartanburg, SC. She graduated from high school in 2006 with full honors and as a member of her high school Literary Club and the Spanish Honor Society. In January 2014, she graduated with her second degree in Criminal NeuroPsychology. She married her husband Edd Sowder in May 2014 and still lives in Spartanburg, SC where she is basing Burning Willow Press. Her works have earned multiple award nominations.

“Where is Apep? Have you seen her?”

“Not after she saved us. I felt that I needed to find you first, and from what I’ve seen, we are the only two that are unharmed,” he answered.

“I’m sure she is out here somewhere. She wouldn’t have taken off without us,” I said as I turned, attempting to locate her amongst the smoke and embers. Nothing. “Apep!” I cried. “Apep!”

I turned and settled on a direction to begin moving to find her. From what I could tell, this destruction went on in every direction for at least a quarter of a mile, the fires still burning in the distance and overtaking the forest around us. Her fire had created a massive clearing in the middle of the forest once she had unleashed it, obliterating everything except those who she loved. I walked past Victor, jerking my arm away from him when he tried to hold me there.

“Where are you going? There’s nothing else we can do here. We have to get back to Archer’s State and report this to the Sentinel’s Council.”

“Then go, Victor, but I’m not leaving without her.”

I had only made it a few paces before I turned back to him, rage filling me, and stalked toward him. He didn’t move or even flinch despite my anger.

“You can turn back and report this without me if you want, but I am not leaving without Apep. When she chose me, we made a vow that we would never leave one another, and I will not break it now. She trusts me.” 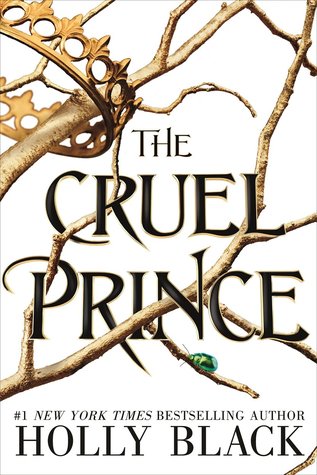 Jude was seven years old when her parents were murdered and she and her two sisters were stolen away to live in the treacherous High Court of Faerie. Ten years later, Jude wants nothing more than to belong there, despite her mortality. But many of the fey despise humans. Especially Prince Cardan, the youngest and wickedest son of the High King.

To win a place at the Court, she must defy him–and face the consequences.

In doing so, she becomes embroiled in palace intrigues and deceptions, discovering her own capacity for bloodshed. But as civil war threatens to drown the Courts of Faerie in violence, Jude will need to risk her life in a dangerous alliance to save her sisters, and Faerie itself.

I was worried going into this that I wasn’t going to enjoy it because the hype around this book was massive and I was seeing it everywhere. However I didn’t have a reason to worry because I adored this book. It was such a good read where I didn’t want to put it down.

I really enjoyed the world and how it was developed. The plot was more focused on the politics and hierarchy of the world and in my own opinion it was amazing and well written. I enjoyed Jude’s character and the way she was written, her sisters were also good characters, especially her older sister. Prince Carden and his posse were awful and mean and I despised them. However by the end of the story Carden did grow on me. Locke betrayed my trust and that’s all I’ll say about that!

There was an event that happened quite far in that left me shocked, I didn’t expect and I was in disbelief the whole time. It was so well written I felt like I was there.

Overall this was amazing and entertaining and I need book 2 immediately but I unfortunately have to wait until next year for it to be released.

Hey guys I am excited to be taking part in this blog tour for Tell No Lies by Lisa Hartley. After the book Spotlight there is a Q&A with the author so stay till the end for that.

Book Blurb: Now they’re coming after Caelan’s team…
A tortured body is found in a basement. Drug dealing and people smuggling is on the rise.
Then police start going missing.
There seems to be no connection between the crimes, but Detective Caelan Small senses something isn’t right.
Plunged into a new investigation, lives are on the line. And in the web of gangs, brothels and nerve-shattering undercover work, Caelan must get to the truth – or be killed trying.
And then there’s Nicky…
Utterly gripping, written with searing tension and remarkable dexterity, Tell No Lies is a blistering crime novel for fans of Angela Marsons, Rebecca Bradley and Faith Martin.
Links to Book:

Author Bio:
Lisa Hartley lives with her partner, son, two dogs and several cats. She graduated with a BA (Hons) in English Studies, then had a variety of jobs but kept writing in her spare time. She is currently working on the next DS Catherine Bishop novel, as well as a new series with Canelo.

Q&A with the author:
What inspired the book? – This is the second novel in the Detective Caelan Small series, and I wanted it to follow straight on from the events of the first book, ASK NO QUESTIONS. This meant picking up certain strands of that story again, as well as thinking about the impact those events would have had on Caelan and the people around her. I also wanted to explore Caelan’s character a little further, throwing her into situations that would force her to make difficult choices.
Who or what influenced you to be a writer? – I think my love of reading has been the biggest influence. Books can transport us to another place, another time, and open our eyes to so much without us having to leave our chair. A writer can make us ask questions and realise things about ourselves. Books can break down boundaries, make people sit up and take notice. I began to read long before I attempted to write anything, but I think the two definitely go hand in hand.

What was the first book you can remember reading? – I don’t remember the exact book, but it was no doubt written by Enid Blyton! I loved all of her books, especially the adventures of the Famous Five and the Secret Seven. I still love reading about a cast of characters over a series of books, and Blyton’s stories were probably where that began.

What is your favourite thing about being a writer? – Honestly, it’s a dream come true. It was something I never really expected to happen though. It still feels a little unreal. There are lots of great things about being a writer – being able to read a huge range of books and loosely call it ‘research’ for one! I’ve met some wonderful people through my work and been introduced to books I would probably never have read otherwise. I have a son and other family commitments, and being able to work around school holidays, appointments and so on is a huge help. I know I can catch up in the evening if I need to take some time out of my working day, which is a real blessing.

Do you have a favourite thing to do when you are writing? – I usually have a cup of tea to hand, though I’m always trying to drink more water! I like to have a rough daily word count and keeping a track of my progress on a book seems to help keep me focussed. Other than that, not really.

What advice would you give to aspiring authors? – Firstly, read as much as you can. You probably do anyway, but I think it definitely helps. I also spent a long time dreaming about becoming a writer without doing much writing at all. If you have an idea and characters you believe in, keep at it. If you only write a hundred words a day but keep going, eventually you’ll have a first draft, and then you can really get to work.

Hey guys, time for another wrap up post. This month I challenged myself to read books written by female authors to celebrate the anniversary of votes for women. I did quite well and managed to read 7 books in total which were :

So overall I had quite a successful reading month, all 4 or 5 star reads. I would have liked to fit in a couple more books but I’m happy with the seven I got.

How was your reading in February?